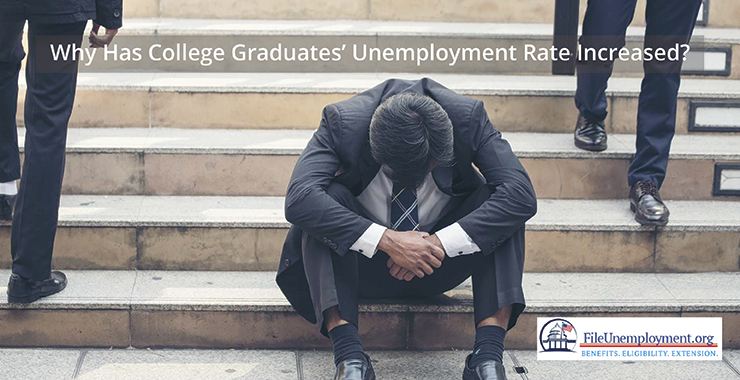 Educational attainment and unemployment rate are closely correlated, as the unemployment rate by education shows softer curves and lower values, the higher the qualification. And yet, the past decade has thrown up a curious aberration as college graduates’ unemployment rate increase showed a sharper uptrend than any other group.

Why Are Unemployed College Graduates Such A Cause For Concern?

Unemployment among graduates is problematic not only because they are more vulnerable to the usual problems caused by high joblessness but also because of the financial costs associated with American higher education. Student loans have become the 2nd largest debt category in the US, and the student loan debt amount is likely $1.56 trillion, owed by about 45 million borrowers.

The average debt per student is about $36,000, while the median student debt is about $17,000. About 56% of debt forgiveness applicants don’t end up qualifying. People spend over 10 years repaying the debt while also amassing home and car loans.

As mentioned above, specific disciplines have higher unemployment and underemployment, such as liberal arts, performing arts, media, ethnic studies, anthropology, philosophy, and criminal justice. When these graduates struggle to find jobs in relevant industries that can effectively use their skills, they may struggle with upward mobility in their future careers. Many who enter low-paying jobs may find it hard to transition away later.

New graduates enter the market with every passing year, making it harder for those still unemployed and enter the cycle themselves. Not selecting an in-demand major seems to affect their chances negatively. The alternative of a research career is also not easy to accomplish with diminishing funding every year.

The role of universities in the recent graduate unemployment crisis is getting a lot of attention in recent years. They are facing criticism for not aligning their curricula with the job market requirements. While STEM employers often invest in upskilling their recruits, the lack of marketable skills among the other graduates makes it harder for them to find jobs. While university fees go up frequently, students emerge unprepared for the realities of adulthood and job life.

The second problem is a perceived lack of fresher jobs compared to those requiring slightly more experienced applicants, whether or not the actual work requires any advanced skills. The lack of networks also hurts recent graduates, as many jobs are obtained through referrals.

Although universities are supposed to provide lots of opportunities to develop people skills, that’s not necessarily true. Graduates with poor social skills may be unable to get through job interviews.

How Has COVID-19 Affected Things?

It was hard enough for college graduates who had difficulty getting jobs before 2020, when the economy was strong. The pandemic has decimated industries where recent graduates with fewer skills could make enough to pay off bills. They are struggling to pay bills, buy groceries, etc. Many are expected to default on their loan repayments, though there were temporary respite measures initially.

Many students have chosen to postpone college or defer their admission due to economic instabilities. Many cannot afford the expenses now, while some may have to drop out as they are afraid of the inability to make enough money in the future to repay the debt.

Finding a job is more challenging than ever, with many recent graduates seeing their employment offers rescinded. Even aspiring teachers are finding it difficult as many schools are unsure of what the future holds.

Yet, some people want to transition into new careers and consider getting graduate degrees as adults. Many are afraid to have gaps in their resumes and plan to return to school to upskill till the virus blows over.

Young graduates eligible for unemployment insurance have been greatly aided by the same, and the extra $600 payments provided respite to many. The government will have to alleviate various concerns in the future, as hopes for a vaccine appear on the horizon.