In the US, the Social Security Disability Insurance program is one of the most misused programs. The newly added feature states that those who received SSDI benefits would be reviewed. Before the added feature, once people are in the SSDI system that they can rarely get off until now.

A New York Times report suggests that social security plunged as the economy continues to get stronger. This shows that disability claims have fallen to a 15-year low where only 8.63 million received disability benefits as compared to 8.96 million in September 2014. 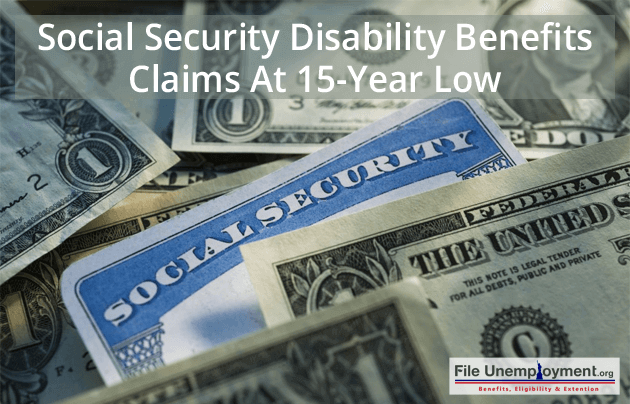 This showcased that projected solvency of Social Security of the long depleted Disability Insurance trust fund has been extended to 2032. This is nine years later since the projection was two years ago. In this regard, this is a massive gain and explains that there has been a huge drop in the number of beneficiaries.

While the disability claims fell to a 15 year low in 2017, it also saw projected solvency of Social Security of the Disability Insurance trust fund to be extended all the way to 2032. This means that the number of people in the program’s rolls has fallen by more than 350,000 from its peak four years ago.

This helps predict the economy as it continues to improve. The two things that you notice about this is that people prefer their dignity of having a job and the second is that they are tempted to cheat if the jobs are scarce which is not a good sign.

While a strong economy should not have a big effect on how many people are too disabled to work. At the same time, there are some that abuse the system to make a gain. In this case, it’s as simple as reasoning that certain people would defraud the system instead of getting off the couch.

On one hand, applications for disability benefits jumped nearly one-third in the first two years after one of the worst financial crises hit the U.S. Though there was an outpour of applications, this did not afflict the several people that subscribed to the system.

At the same time, magistrates would evaluate disability claims that are retrained to avoid awarding several payments to those that make a mockery of the system. So the question is, who benefits from the decline in the SSDI claims?

The straightforward answer would be the taxpayer for sure. Here people that are genuinely disabled and unable to work would be allowed to receive disability.

In today’s society, there is a safety net for people that are incapable of supporting themselves. It is when able people claim benefits that it destroys the support structure of the system.

The thumb rule is those capable people that can support themselves should not drain the funds for those that cannot work. Thus, a leaner disability program would ensure that fewer people would benefit from a stronger program with a safer trust fund.

While there is also another set of beneficiaries that really do not deserve the SSDI benefits, this would lead them to have jobs and leading honest working lifestyles.

While disabled workers can apply for both SSDI and Workers Compensation (WC) benefits, there is an estimated 10% of the SSDI beneficiaries that qualify for WC benefits. In the same way when evaluating how individual states treat SSDI within their workers’ compensation system regulatory framework. This is an important trend that involves dual receipts.

In addition, this is critical to understand how federal and state insurance programs share the cost incurred in caring for these individuals. Here, the number of SSDI beneficiaries rose by 58% and the SSDI expenditures grew by 138% between the 15-year period of 2001 to 2015.

In terms of expenses, this means that expenditures grew from $60 billion to $143 billion and peaked in 2010. After which, the number of SSDI beneficiaries have been stable and growth has been moderated.

This leaves the Social Security Administration to suggest that the number of applicants is to decline after the recession when the number of beneficiaries peaked. So even when the government number crunchers were unaccounted for, the duration of the fall set it off.

At the same time, the expansion of Medicaid in 33 states and the District of Columbia has been successful. It has improved insurance coverage under the Affordable Care Act where experts argue that fewer people look into the disability program as a way to obtain health care.

To finally understand the ramifications of this, a 2017 study explains that there are field office closings that lead to large reductions in a number of disabled applicants. Those that had moderately severe conditions, low education levels, pre-application earnings were hit the hardest.

If you are looking for a job then you’ve come to the right place. Find out about the states that have the lowest unemployment and the best places to find a job this year. If that does not work out well then you can use the Benefits Calculator and get to know what you stand to gain if you are eligible.