Artificial Intelligence is set to change the landscape of the job market by cutting jobs, adding Artificial Intelligence (AI) related jobs and ensuring that the workforce continues to reskill themselves. After all, AI was developed based on the theory and the development of computers that are able to perform tasks that require human intelligence. This could be visual perception, decision making, speech recognition, and translation. This term was coined in 1956 and has now become popular based on advanced algorithms, data volumes, and significant improvement in storage and computing power. During the 1950s, AI revolved around symbolic methods and problem-solving. In the 1960s, the US Department of Defense started training computers to mimic basic human reasoning. It was the Defense Advanced Research Projects Agency that did street mapping projects in the 1970s. In fact, DARPA had intelligent personal assistants in 2003 way before Cortana, Alexa, and Siri. This resulted in automation and formal reasoning that computers possess today. This includes smart search systems and decision support systems that will complement and augment human abilities. AI technologies have now been able to help specific benefits in all industries like healthcare, retail, and sports.

AI is the new technological frontier, countries, and companies are working hard to gain control of this emerging technology. Alphabet has invested $30 billion and Baidu set aside $20 billion to develop AI technologies. Goldman Sachs suggests that self-driving vehicles will make 25,000 truckers lose their jobs every month. Similarly, large warehouses can now operate with just a dozen people and this is set to affect nearly 1 million packers and pickers in the US.

Companies like Amazon Robotics are using a combination of advanced robotics and a combination of artificial intelligence to help big-box retailers with logistics solutions. DARPA, the organization behind the internet and GPS navigation is currently working with Boston Dynamics to create robots for disaster relief and also worked on the Atlas robot.

Earlier, publishers would spend hours and even days to create content for their website and social media. Wibbitz allows publishers to create videos in minutes and the Associated Press uses a tool called Wordsmith to create news stories based on earnings data. In 2018, you can expect more media professionals and companies to use natural-language and video-generated technologies.

In 2017 alone, there were over 20 million Amazon smart speakers sold and this is without counting the number of Google Home and Apple Airpod devices. By this, you can imagine the number of Americans that can control their homes by interacting with technology by using voice commands. By the end of 2018, consumers should be able to interact with smart assistants that will be integrated with smartphones, televisions, and computers. This is great news for data scientists that will see a growth of over 2.7 million jobs by 2020. These AI jobs would be required to enhance AI machine-learning requires probability to determine the proper decision and answer for a given problem. The platforms require more data to make better predictions. With the growth of the company, it will make it more cumbersome to analyze data and hence there is a need to hire data scientists to handle large data sets to aid these AI platforms. 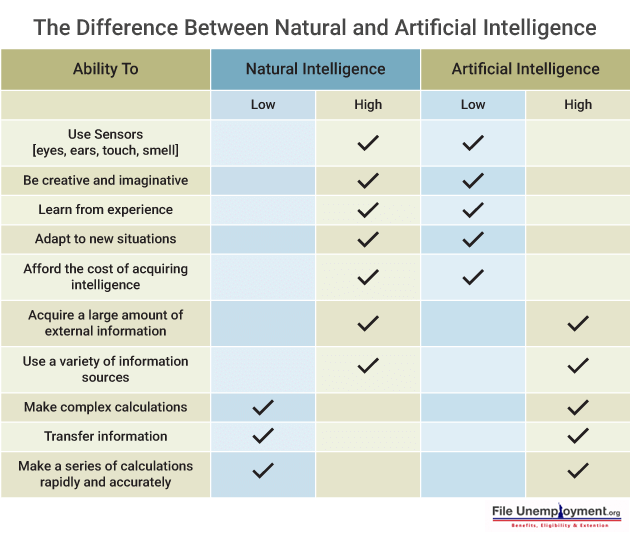 Today robotic automation has grown to be a disruptive force. Even now two-thirds of Americans feel that robots would perform most work done by humans in the next 50 years. In addition, nearly 80% feel that their current jobs will most probably exist in their current form within the same timeframe. The recently concluded World Economic Forum suggests that automation including AI would result in the loss of close to 5 million jobs globally by 2020. Similarly, the International Labor Organization states that nearly 137 million workers in countries like Philippines, Thailand, Cambodia, and Vietnam which accounts for 56% of the total workforce of the countries would be displaced by robots. These workers are mainly from the garment manufacturing industry.

But on the contrary, Genpact CEO NV Tyagarajan feels that there would be a sizable number of jobs that this technology would create. From data suggested by the Robotics Industries Association, it reveals that robots are likely to become the workforce of tomorrow. Within the first half of 2016, North American robotics technology vendors sold 14,583 worth over $817 million to companies across the world. More than 265,000 robots would be deployed at factories across the country and placing the US in third place when it comes to robotics deployments after China and Japan. 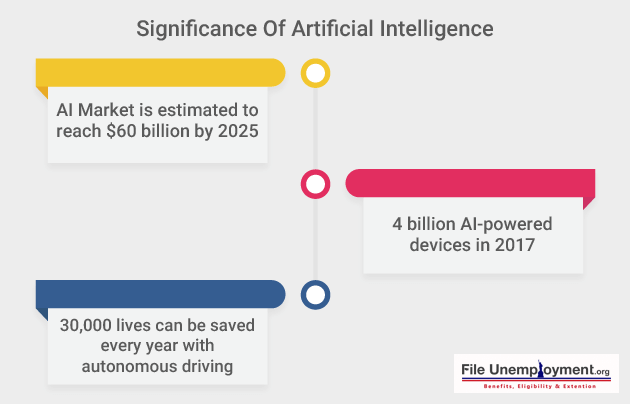 Robotic automation requires servicing and programming with the help of high-skill jobs for technicians, programmers, and others. This will create a new set of high-skilled jobs but for every job created by robotic automation, several thousand jobs would be eliminated and this would be disruptive to any workforce.

You should know that by the end of 2018, one-third of robotic deployments would be smarter, more efficient and would be able to collaborate with other robots. This would allow them to work safely alongside humans. In early 2019, there would be a Chief Robotics Officer for 30% or more of the world’s leading companies. Several governments around the world will have drafted or implemented specific legislation surrounding robots and safety, security and privacy. When the year 2020 approaches, average salaries in the robotics sector will increase by 60% and nearly a third of the available jobs in robotics will remain vacant due to a shortage of skilled workers in this sector.

The field of robotics favors Trump as he pledged to bring back manufacturing to the US. But on the downside, it would not help in bringing back jobs for lower-skilled workers. Corporations can mitigate against increasing labor costs in the US without compromising on profit margins to automate low-skilled jobs. This means that this can bring back manufacturing back to the US or create new jobs but not both together. Since millions of jobs would be at risk and the worldwide employment crisis looms at large, the only logical thing to do is to enhance the education of tomorrow. This means that people would have to learn about AI and the robotic workforce. In some markets that have unstable employment, developed nations look to science, technology, engineering, and math or STEM graduates to stay competitive.

2017 is the year of the hype cycle for emerging technologies as AI will automate 1.8 million people out of work by 2020. While job losses generate the most interest among the headlines, losses only tell a part of the story. But once you review the possibilities of AI, you will come to know that it will create 2.3 million jobs by 2020 with a net gain of 500,000 jobs. In time, you would question how many companies would successfully deploy AI and not replace the human workforce. This means that in time, it would help humans be faster and more productive. The notion of technology being a killer of jobs has plagued the job market for several years. Automation has made it cheaper to produce fabric and led to more customers. This, in turn, drove demand and the product. Since the job changed, during the industrial revolution, there has been no shortage of work for semi-skilled labor. While 21 percent viewed AI as something to excited about, 17 percent felt it would be disrupting and enabling, while 9 percent felt AI would displace most jobs in 10 years.

There are a number of positions that are developing around AI. This includes data scientists, AI trainers, capabilities related to modeling, computational intelligence, mathematics, machine learning, linguistics, neuroscience, and psychology. AI will take on more work that we currently handle, constantly learn and adapt to new skills which will be the same for every worker to maintain their job. The challenge now is how is AI related to the change in the scope of human jobs in the light of AI’s automation and autonomy. Though the potential effect of AI on jobs includes job losses, it would also require a number of AI-related skills. You should also know that AI cannot completely replace human judgment. AI is today, just a manifestation of an ongoing workplace evolution. Since the industrial revolution, there are many innovations that are associated with the transition period of temporary job loss. This is then followed by recovery and the business transformation. In a similar manner, AI would likely follow suit. Moving forward workers and leaders looking at AI as a robot would steal jobs and hence should start looking at intelligence augmentation (IA). To mitigate this issue of having a lack of well-trained professionals, businesses should look inward and enforce reskilling and on-the-job training. In time, staff trained in AI would be able to focus on critical activities which in turn would boost productivity.