Quitting a Job Voluntarily to Move Out With Your Spouse

Your spouse shifting states or countries for work can be a strain not only on your relationship but on your monetary condition as well. Though many individuals now take the bold move of quitting their own job and moving with their better halves, the shift can affect your career and make a marked difference in the family’s bank balance. Unemployment Benefits aim at making sure that such shifts are easier, though usually, they cater to individuals who have been laid off or were facing issues of health or harassment – not those who have voluntarily chosen to quit. Looking to provide funds for workers who are between jobs to be able to sustain their livelihood and support their dependents, the Unemployment Benefits adhere to strict eligibility criteria.

The “Good Cause” clause

The primary requisite to be eligible for unemployment benefits is that the reason for you quitting your present job was beyond your control and through no liability of your own. In fact, voluntarily quitting is itself an automatic nullification of the clause.

Fortunately, some states within the US have instituted the Good Cause clause, wherein spousal transfers are acknowledged as a valid reason. It is important for you to have a comprehensive understanding of the laws of your state of residency – make sure if you qualify for benefits before sending in your resignation letter.

Depending on the state you reside in at the time of the transfer, the state laws will determine which kind of transfers will be acknowledged as a necessary move. Thirteen states in the US recognize only military-related job transfers of either spouse as a clause within which the other can apply for unemployment benefits. Nineteen others recognize both militaries as well as other shifts in placement from one city or state to another, and certain states such as Alabama, Vermont, Hawaii, and West Virginia do not acknowledge spousal transfer as a valid reason for benefits at all.

For a full list of state-wise laws regarding unemployment benefits, refer to FileUnemployment.org.

The first step to the application process is knowing the laws of your own state, which will help not only in you know whether you are eligible or not, but also if any queries are raised during the review process by the labor department.

An application form is available on the state’s labor department website, which you will be expected to fill and submit for review. Make sure that the reason you state for quitting is stated clearly, as is your marital status; most often states only recognize legally binding marriages and not domestic partnerships or consensual relationships.

Four major concerns are looked at by the review board, which you must also keep in mind.

The first is a distance of relocation, how far your spouse is being relocated from your current residence and whether or not access is truly hampered due to the shift. If the commute to and from is reasonable, or even within the same state, the claim will be denied in most states. Shifts that are recognized without an issue usually look at inter-state commutes.

The second is the legality of the relationship, whether or not the marriage is official. Some states do allow leniency for fiancés, but very few recognize domestic partners as eligible for benefits.

The last of these is more for you than for the review board, it is for you to know the limitations of unemployment benefits once you have been approved. The process doesn’t just begin and end with the approval of the application, in fact, there are many times wherein the benefits are not enough to cover your expenses at all.

The primary requirement as an individual applying for such benefits is that you have been consistently in search of work for a minimum period of six months, though this time span may vary from state to state. Also know that the amount you receive per week will reduce according to your previous earnings, as well as proportionally to the time you remain unemployed.

Military shifts, officially known as Permanent Change of Station (PCS), has a direct impact on the financial condition of the family, considering the loss of income of the spouse is inevitable.

The government provides for a very functional system within which a military spouse is provided assured benefits, in all but five states of the US (the exceptions being New Hampshire, Louisiana, West Virginia, Ohio, and Idaho). While the military is continuing to work with the five states that deem PCS as a voluntary shift for the spouse, some of the other forty-five even take it a step further, by being lenient when it comes to the employer’s status on unemployment filing, supporting the military spouse during the shift, and assuring that the new employer does not discriminate against them because of the constant shifting. 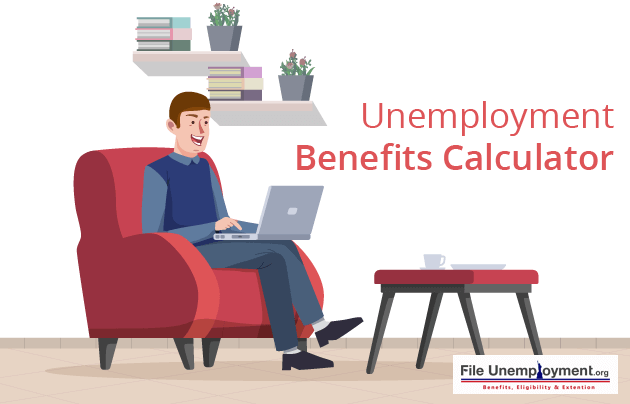 FileUnemplyment.org caters wholly to individuals who are in a status of flux when it comes to their working status, be it because of voluntary reasons or causes beyond their control.

Besides providing information about the process, varied state laws and what to be aware of FileUnemployment.org also brings you the Benefits Calculator, which gives you an approximate of how much you will receive on a weekly basis.

The calculator looks at your current salary, weeks of unemployment and the state you reside in to calculate the amount you are eligible for, preparing you for what is to come. While the calculation depends on your earnings, there is an upper limit of weekly benefits that cannot be exceeded.